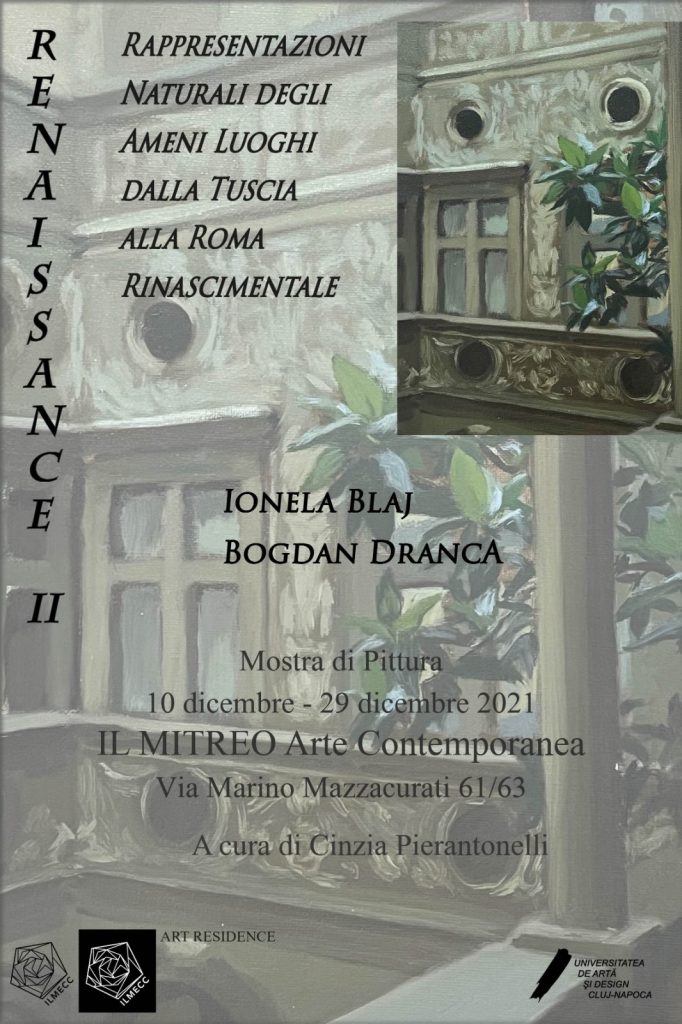 Spotlighting Cluj is a Collective Art Exhibition dedicated to multiple artists belonging to the prestigious University of Art and Design of Cluj-Napoca.
More than 90 artists present their artworks: Paintings, Sculptures, Installations, Graphic Arts, photo-video, painting for restoration, ceramic-glass-metal, textile design, fashion design, product design, and graphic design. Diverse forms of art which conceive a chaotic yet intricate environment combining both traditional and digital art, a various Art Collection created by artists living in Romania and sharing the same cultural creative environment.
By showing in Rome this collection, the University of Art and Design of Cluj-Napoca intends to create an artistic bridge between two countries, Romania and Italy, which share a common historical past and a present which currently in the light of the steady business exchanges generates more and more social contacts.
The University of Art and Design of Cluj-Napoca reveals a copious creative expression produced by the different departments and both by emerging and professional artists in an attempt to transfer cultural concepts and create a dialogue among international artists.
This dialogue especially dedicated to the public in Rome, by showcasing dissimilar creative layers and topics would represent the possibility of an encounter which can open new spaces and reflections to be dwelled upon.

Choosing a suburban space in Rome such as Il Mitreo we intend to add value in the almost forgotten periphery of the metropole.
This art Gallery is placed within the well-kwon kilometer building, Il Serpentone, the big snake, planned and realized by the architect Mario Fiorentino in 1972, this architectural concept devoted to the working class should have conceived an alternative and modern way of life in the peripherical area of ​​the city.
But in the collective imagination it became a symbol of the urban decline. Decades of debates and political battles brought to a regeneration which can be observed among the other things by the cultural engagement of Il Mitreo.
This is the reason why Il Mecc supports cultural and creative projects which enhance the peripherical areas: to bring cultural life and active participation among people with the intent to de-provincialize remote places.

“1989-2019: East Gallery 2 – 30 years after the fall of the Berlin Wall” is an itinerant, composite but mostly osmotic exhibition basing its intellectual contents on exchange, and on mutual and constant creative growth. International artists, from Western and especially Eastern European countries, with different artistic backgrounds, and European experiences, of various age groups, professionals with varying levels of experience, compare their creativity by focusing on a present determined to obstruct any possible processes that divide in an insidious way West and East.

Artists attempt to compose autobiographical, biographical and dystopian texture of a world that has quickly transformed during the past three decades since the fall of the Wall whose historical memory is fading. Artists show, through creative gesture, the reception of those contents in an ideal future with a utopian vision where Walls will no longer exist.

In this second Roman edition, the exhibition, at the prestigious Sapienza University seat of the Department of Political Sciences, is enriched by new artists’ new work. They are receptive to the topic and aspects produced by the multiculturalism generated by cross-fertilization, by awakening intellectuals stimulated by new technologies and communication methods. Since the initiative is the result of a project on historical memory developed through the creative act, this exhibition is deliberately an ongoing process aimed at welcoming, every time, new proofs, new trends and artistic sensibilities. The German President Steinmeier spoke, with a firm and resolute tone, on the occasion of November 9 th2019, 30 years after the fall of the Berlin Wall: “Let’s tear down the walls of anger … of frustration, dumbness and estrangement …”. Instead, the Chancellor Merkel spoke, with ambiguous feelings, on the importance of the founding values ​​of the European Union – freedom, democracy, equality, state of law, rights… Chancellor Kohl promised “Blooming landscapes”, at the time of reunification on October 3 rd1990. Antinomies between past and present are the questions that animate the exhibition in which the creative act becomes the result of reflections on social impact and repercussions across Europe since the Berlin Wall no longer divides Europe, the Iron Curtain and the Cold War are over. International artists, each with their own sensitivity, background and culture, try to answer these questions and express their opinion through paintings, sculptures, multimedia work and poems.

The historic event that highlighted a break in the western hemisphere, the fall of the Berlin Wall – namely an end with no return of the Iron Curtain, of decades of tensions between Eastern and Western Europe in which parallel worlds and discordant ideologies existed. The fall of an historical era has suddenly transformed, and absorbed different cultures and helped worlds, that once were forced to be apart, to have a contact again.

These changes occurred so quickly, even fostered by an increasingly pressing technology in everyday life, to make difficult to assimilate and to truly rework historical facts – those events that from the post-war period to 1989 involved all the countries beyond the Curtain.

Art, in its language common to peoples of multiple cultures and multiple languages, brings people together and leads them back to memory path, albeit with very different forms and ways.

Visitors should read paintings, installations and short films like book pages and interpret them- as they would with books- in order to lead us back to a meaning, appreciate them so that their aesthetic value is recognized or left to their own fate.

Ambassader of Germany Susanne Wasum-Rainer (2015-2018) met the artists who were residing at IL MECC, she examined and appreciated a lot their works. The meeting is attended by the mayor Eugenio Stelliferi, director of Academy of Romania in Italy Prof. univ. dr. Rudolf Dinu, and other exponents of cultural world. The residing artists were: Avram Cristian-Nicolae, Mihai Bogdan-Dragoş, Marin Tincuţa and Pacurar Matei. The same artists have produced a series of works on Renaissance themes exhibited at IL MECC. Their works will be part of the exhibition on the theme that will be held in spring of 2021.